During the past weeks we have been very lucky to see nurse sharks in Tayrona Park, so lets talk about them.
And another video of a nurse shark trapped by a ring. 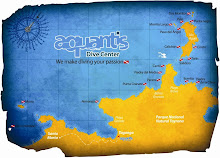